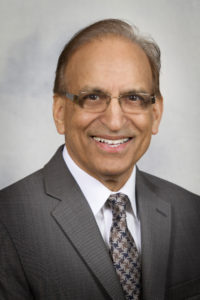 Dr. Saeed received his specialty training in Physical Medicine and Rehabilitation at the University of Washington in Seattle, Washington. Following residency, he served in the United States Army at Madigan Army Medical Center in Tacoma, Washington, and from 1981-1982 as Chief of the Physical Medicine Service. Since 1982, Dr. Saeed has been in private practice, now as senior partner with EMA Puget Sound. He has published several articles and abstracts on a broad range of Electrodiagnostic topics.

Dr. Saeed has often been invited faculty at the American Association of Neuromuscular & Electrodiagnostic Medicine (AANEM) annual meetings and has actively been involved on the Education, Workshop, Training Program, Program Committee and Professional Practice Committee. Currently, he is serving as the AANEM state liason and on the lab accreditation committee.

He previously served as the Secretary/Treasurer of Washington State Society of PM&R and has been very active on behalf of the Washington State Society of PM&R. He has been an examiner for the American Board of Electrodiagnostic Medicine for many years. He has been requested to review articles for the Archives of the PM&R Journal. The AANEM honored Dr. Saeed with the first AANEM Outstanding Advocate Award.

As of September, 2011, Dr. Saeed has been nationally recognized as Co-Director of an AANEM Accredited Electrodiagnostic Laboratory – Exemplary Status, the 1st Multi-Physician laboratory in Washington State awarded this prestigious distinction.