It is very important that every muscle evaluated by needle EMG, assesses both the resting muscle membrane, and also the active recruitment pattern.

A normal muscle at rest is electrically silent as demonstrated below. When the needle is inserted or adjusted slightly, there is a brief spurt of electrical activity, followed by a very quick return to electrical silence absent any spontaneous activity. 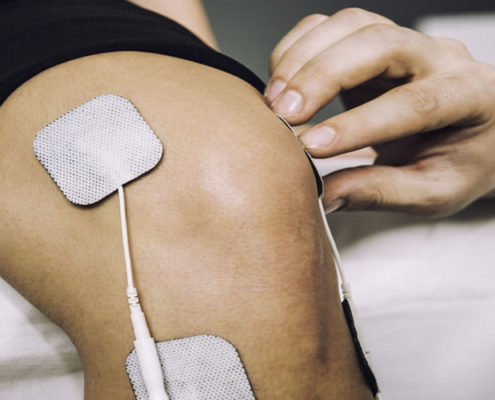 A normal muscle at rest is electrically silent as demonstrated below. When the needle is inserted or adjusted slightly, there is a brief spurt of electrical activity, followed by a very quick return to electrical silence absent any spontaneous activity.

When there is muscle and/or nerve irritation, or a metabolic abnormality, the muscle membrane becomes hyper-excitable and results in increased insertional activity. The discharges are sometimes referred to as complex repetitive discharges.

When there is nerve fiber injury, be it from entrapment neuropathy such as Carpal Tunnel Syndrome or root compression such as from disc herniation or bony Stenosis with axonal/nerve fiber injury, denervation potentials develop in the muscle known as positive sharp waves (PSW) and fibrillation potentials (FP) in the nerve distribution distally. The sound of positive sharp waves have been described as, like ‘claps of distant thunder’, and fibrillation potentials a higher pitched and shorter duration sound, like ‘rain on a tin roof’. The degree of denervation, i.e. PSW & FPs, is often graded on a scale from 1 – 4, grade 1- occasional; to grade 4- ‘filling the screen’, reflecting a much more severe degree of nerve injury. Below, grade 1-2+ is demonstrated.

The firing pattern of muscles during a light contraction provides invaluable information about the health and abundance of motor units, and thus the number of functioning nerve fibers supplying the muscle being tested.  Normal motor units are between 200 mV to 5 mV and usually have a crisp bi- or tri-phasic appearance.  Upon a full muscle contraction, the motor units fill the screen.

After nerve injury, there can be recovery from several mechanisms.  Nerve fibers can re-grow down the old nerve sheath, or remaining nerve fibers can sprout (like shooters that develop after trimming a tree limb).  However, the new sprouts are de-synchronous and thus polyphasic in appearance ( > 5 phases), and as the reconstituted motor units mature, they become much larger in amplitude than normal (up to 15-20 mV) or 4-5 X the normal size.  Given nerve fiber thinning, the recruitment pattern can be described as neurogenic or ‘picket fence’, i.e. only a few large complex motor units firing with hollow voids.

Subsequent to acute axon/nerve fiber injury, there is a time delay for Wallerian degeneration downstream.  It takes almost 2 days to see early consequences just distal to a sectioned nerve, and 7-10 up to 14 days to see characteristic changes in the innervated muscle, i.e. denervation potentials in response to injury.

Subsequent to acute consequences of nerve injury, through a process of: (1) Axonal/nerve regrowth; and (2) axonal collateral sprouting, motor units that are usually triphasic and not larger than 5 mV become complex and polyphasic on EMG.  As these motor units mature, “giant” complex motor unit reorganization develops up to 15-20 mV+, and thus 4-5 X the usual maximal size.  The recruitment pattern becomes “picket fence” reflecting the degree of axonal thinning with rapid firing (increasing the frequency of muscle fiber firing as one mechanism to compensate by attempting to generate a stronger muscle contraction.

By combining the findings on EMG – Assessing both the: (1) Resting muscle membrane, and (2) the recruitment pattern, the physician can develop a clear picture of acute vs. subacute vs. chronic injury, and the severity ranging from minimal to very severe.

This slide highlights the different appearance of a normal motor unit in a muscle absent prior nerve injury, with an abnormal muscle demonstrating chronic motor unit change: polyphasic, hypertrophic reorganization (up to 5 fold magnitude difference ); while manifesting a “picket fence” recruitment pattern with rapid firing.  (see A-V clip above on Abnormal Recruitment pattern).